✖ To offer you a better experience, this site uses cookies, even from third parties. By closing the pop-up, scrolling the page or clicking on any element of the page, you consent to the use of cookies. For more information consult our Cookie Policy.
Urban agriculture or urban farming encompasses all agricultural and animal husbandry activities taking place in or around cities.
This broad definition enables a great diversity of urban agriculture practices, which vary in multiple ways including location (roofs, walls, aboveground and underground lots), production method (raised beds, hydroponics, aeroponics, aquaponics, open ground, greenhouses, open air), organizational structure (companies, non-profits, start-ups, community organizers), and purpose (productive, educational, participatory, or all at once)!

This definition also provides the spatial perimeter for urban agriculture, ranging from urban to peri-urban areas and allowing for greater linkage between the urban sphere and the agricultural sphere, with the latter historically located beyond the boundaries of cities. This opens up the possibility for new forms of agriculture to be born in the city. 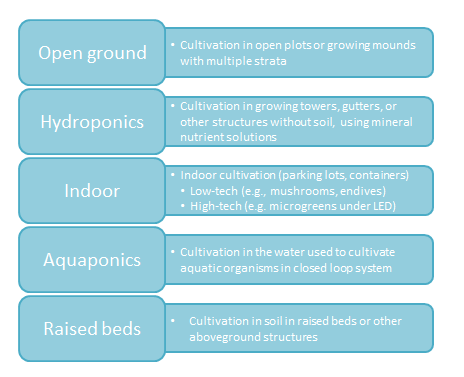 Farming in Paris, a practice with a long history

Agriculture has always been present in the Ile-de-France region. Since the second half of the 19th century, farmers have set out to develop agriculture in the city, and have adapted to its constraints, for example with the famous walls of peaches in Montreuil.
The development of vegetable farms on the outskirts of Paris even led the Ile-de-France region to be called "The Plain of Virtues". 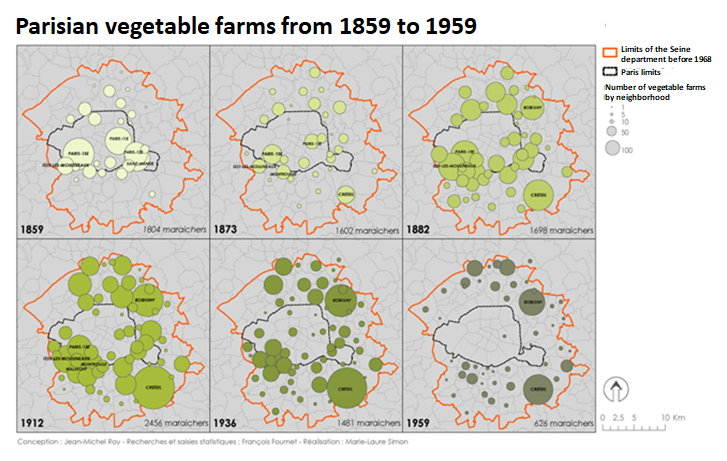 Over the years however, hygiene-weary urban planning policies gradually relegated farming to the outskirts of the city. Today, its comeback is taking new forms that fall under the umbrella term of urban agriculture.
The benefits of urban agriculture 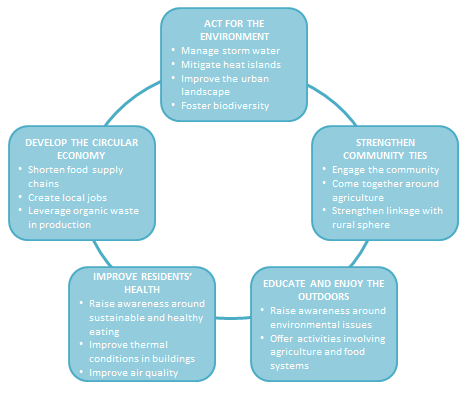 The impact of pollution on food products produced in cities is often the first question to arise. In response, there are numerous studies demonstrating that transfers between air pollution and crops are minimal and present no risk when following certain rules like growing at a height that protects against fine particles, controlling for soil quality, and leveraging ecological cultivation practices.
The minimum height for the cultivation of food products is always taken into account when scoping sites for urban agriculture projects.

Soil quality is essential, as contamination from pollutants occurs primarily through the soil. The City of Paris systematically controls for soil pollution in order to ensure the grounds are suitable for food production.

Parisian urban agriculture projects endorse ecological cultivation practices that prohibit the use of pesticides and agrochemicals.

In addition, urban agriculture projects in and of themselves contribute to reducing pollution in their efforts to minimize the distance traveled by food products between growers and consumers.

Over the last few decades, agriculture has moved further and further away from cities. In order to encourage residents’ engagement with contemporary agricultural issues and promote urban greening, the City of Paris actively supports urban agriculture through Parisculteurs, as well as the following initiatives:

- Implementation of a sustainable food program to reconnect Parisians with local products respectful of the environment
- Creation and access to community gardens
- Educational farms, including the Ferme de Paris (municipal farm)
- Creation of vegetable gardens and orchards in schools
- Development and maintenance of the Paris vineyards
- Creation of greening permits and the Végétalisons Paris platform
- The Breuil horticultural school that trains future urban farmers, among others

Our priority for the years to come is to develop a local agricultural model that promotes better eating habtis and benefits both urban and rural territories.